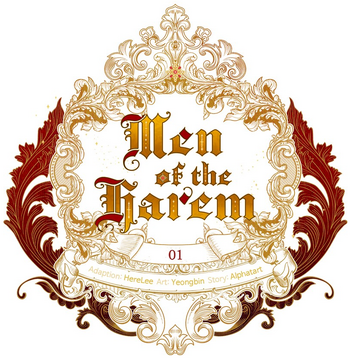 Welcome to the Men of the Harem Wiki![]

Men of the Harem is an ongoing fantasy webnovel written by Alphatart, the author of The Remarried Empress, and illustrated by Chi5on. It was adapted into a webtoon by Heary, with art by Youngbin.

There is currently no official translation available for the webnovel. A partial unofficial English translation can be found on Webnovel, which follows the same update schedule as the free chapters.

The webtoon began serialisation on LINE Webtoon in November 2020. Other than English, it has also been translated into Simplified Chinese, Traditional Chinese, French, Indonesian, Spanish, and Thai. The original Korean version can be viewed on Naver, with paid chapters available on Naver Series.

Scorned by her lover and thrown into power after the mysterious assassination of her father, Latil must marry to secure her sovereignty of Tarium. Instead of choosing one man to become her Royal Consort, she chooses five young men from all walks of life to join her Harem. Will Latil ever solve her father’s murder, and can she keep the peace in her Harem? "Why should I only marry one man?" the female emperor declared. "During past generations, the emperor has had at least five concubines and an average of fifteen. Now that I’m Emperor, I should have at least five concubines, too. The son of a chancellor? The successor to a powerful family? If they’re good, send them to the harem." "My favorite one will become the male empress."

Want to Help Out?

How to Use Fandom Wikia

Community content is available under CC-BY-SA unless otherwise noted.
Advertisement